The greenish-blue peaks in this picture are individual atoms of iron on a background of copper. This amazing image was made by a scanning tunneling microscope. It’s the only kind of microscope that can make images of things as small of atoms. The invention of the scanning tunneling microscope was so significant that its inventors got a Nobel prize for it. Why is being able to see atoms so important? Atoms are the basic building blocks of all the matter in the universe. You will learn more about atoms and matter when you read this book.

The following NGSS Standards will be the focus of instruction for this unit of study.

Matter and Its Interactions

The benchmarks colored BLUE "Need to Know" indicate them as identified for targeted for all students to master, with YELLOW "Important to Know" supporting the priority benchmarks. This was a prioritization process not an elimination - the white are the overall supporting benchmarks.

Here’s a riddle for you to ponder: What do you and a tiny speck of dust in outer space have in common? Think you know the answer? Read on to find out.

Both you and the speck of dust consist of atoms of matter. So does the ground beneath your feet. In fact, everything you can see and touch is made of matter. The only things that aren’t matter are forms of energy, such as light and sound. Although forms of energy are not matter, the air and other substances they travel through are. So what is matter? Matter is defined as anything that has mass and volume. 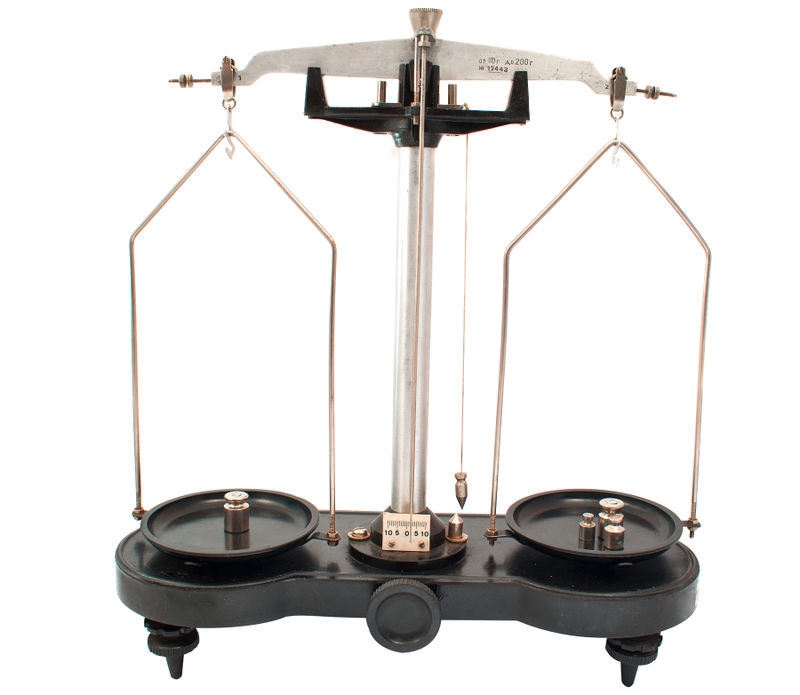 The more matter an object contains, generally the more it weighs. However, weight is not the same thing as mass. Weight is a measure of the force of gravity pulling on an object. It is measured with a scale, like the kitchen scale in Figure below. The scale detects how forcefully objects in the pan are being pulled downward by the force of gravity. The SI unit for weight is the newton (N). The common English unit is the pound (lb). With Earth’s gravity, a mass of 1 kg has a weight of 9.8 N (2.2 lb).

This kitchen scale measures weight. How does weight differ from mass? 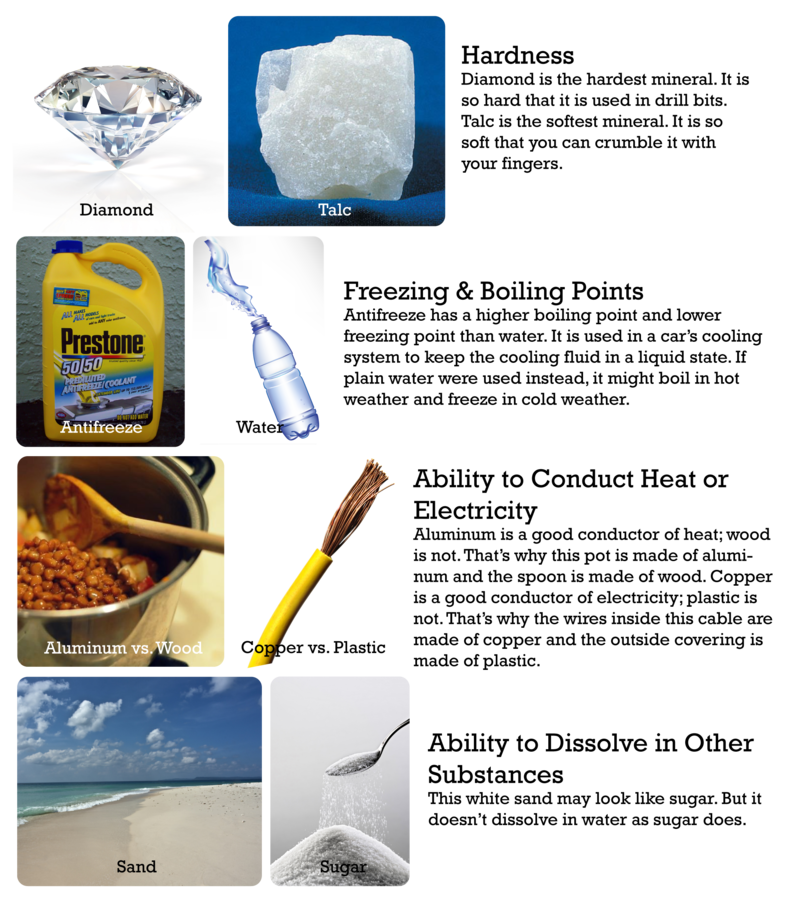 These are just a few of the physical properties of matter.

Density is an important physical property of matter. It reflects how closely packed the particles of matter are. Density is calculated from the amount of mass in a given volume of matter, using the formula:

Some properties of matter can be measured or observed only when matter undergoes a change to become an entirely different substance. These properties are called chemical properties. They include flammability and reactivity.

Flammability is the ability of matter to burn. Wood is flammable; iron is not. When wood burns, it changes to ashes, carbon dioxide, water vapor, and other gases. After burning, it is no longer wood.

Reactivity is the ability of matter to combine chemically with other substances. For example, iron is highly reactive with oxygen. When it combines with oxygen, it forms the reddish powder called rust (see Figure below). Rust is not iron but an entirely different substance that consists of both iron and oxygen. 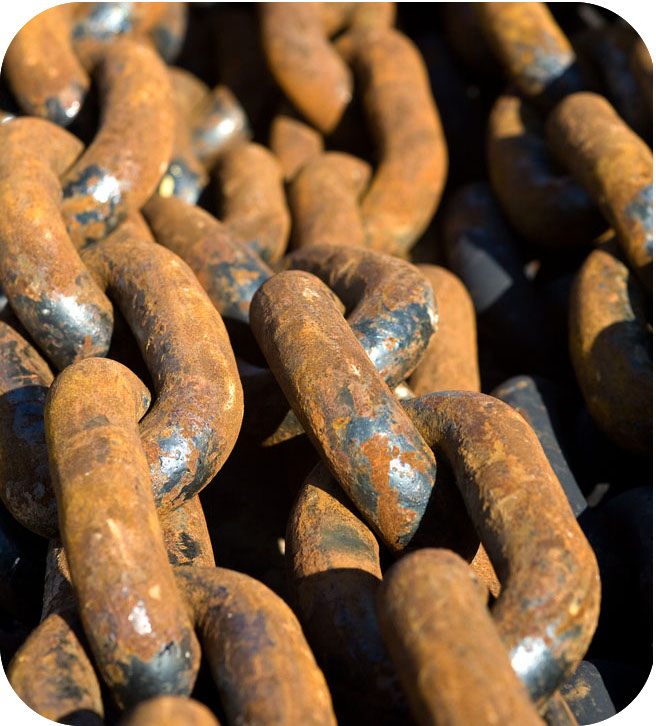 The iron in this steel chain has started to rust.

The properties of matter, both physical and chemical, depend on the substances that matter is made of. Matter can exist either as a pure substance or as a combination of different substances. 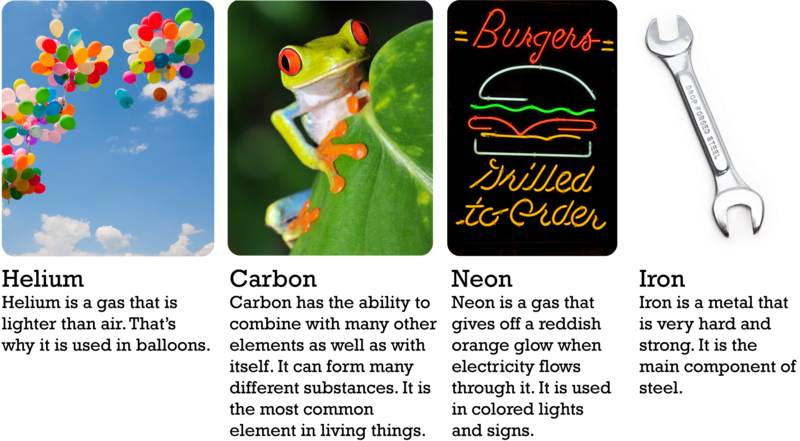 Still others are described in the video below.

Each of the elements described here has different uses because of its properties.

Each element has a unique set of properties that make it different from all other elements. As a result, elements can be identified by their properties. For example, the elements iron and nickel are both metals that are good conductors of heat and electricity. However, iron is attracted by a magnet, whereas nickel is not. How could you use this property to separate iron objects from nickel objects?

Aristotle’s ideas about elements were accepted for the next 2000 years. Then, scientists started discovering the many unique substances we call elements today. You can read when and how each of the elements was discovered at the link below. Scientists soon realized that there are far more than just four elements. Eventually, they discovered a total of 92 naturally occurring elements.

Gold is gold no matter where it is found because all gold atoms are alike.

There are millions of different substances in the world. That’s because elements can combine in many different ways to form new substances. In fact, most elements are found in compounds. A compound is a unique substance that forms when two or more elements combine chemically. An example is water, which forms when hydrogen and oxygen combine chemically. A compound always has the same components in the same proportions. It also has the same composition throughout. You can learn more about compounds and how they form by watching this video:

A compound has different properties than the substances it contains. For example, hydrogen and oxygen are gases at room temperature. But when they combine chemically, they form liquid water. Another example is table salt, or sodium chloride. It contains sodium and chlorine. Sodium is a silvery solid that reacts explosively with water, and chlorine is a poisonous gas (see Figure below). But together, sodium and chlorine form a harmless, unreactive compound that you can safely sprinkle on food. 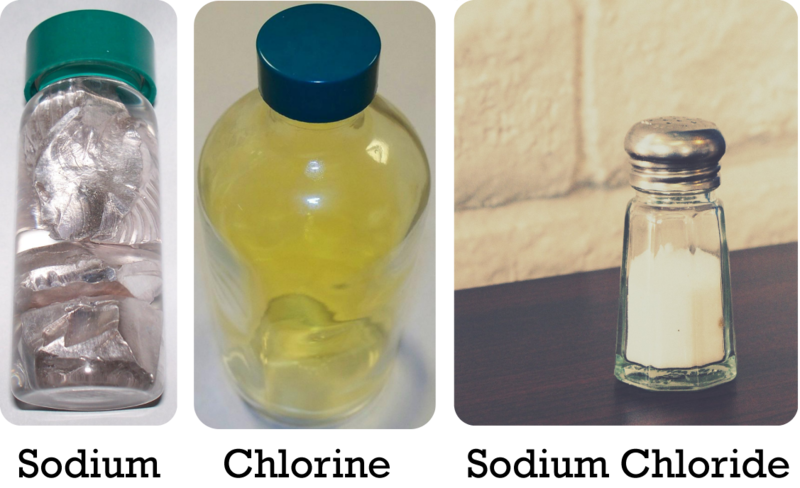 Table salt is much different than its components. What are some of its properties? 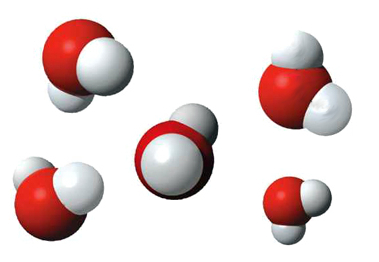 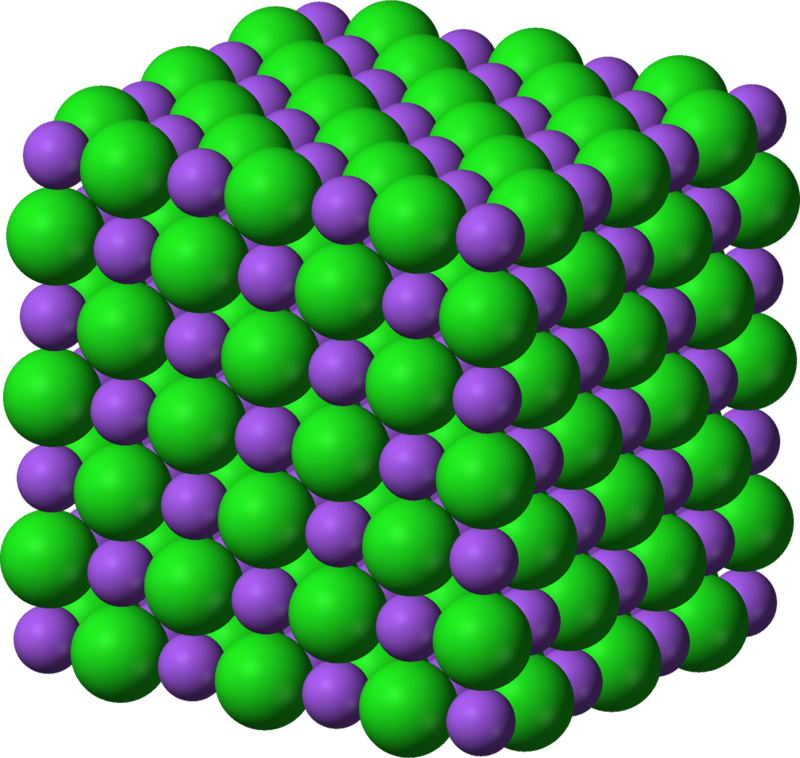 Not all combined substances are compounds. Some are mixtures. A mixture is a combination of two or more substances in any proportion. The substances in a mixture may be elements or compounds. The substances don’t combine chemically to form a new substance, as they do in a compound. Instead, they keep their original properties and just intermix. Examples of mixtures include salt and water in the ocean and gases in the atmosphere. Other examples are pictured in Figure below.

All these substances are mixtures. How do they differ from compounds?

Some mixtures are homogeneous. This means they have the same composition throughout. An example is salt water in the ocean. Ocean water everywhere is about 3.5 percent salt.

Some mixtures are heterogeneous. This means they vary in their composition. An example is trail mix. No two samples of trail mix, even from the same package, are likely to be exactly the same. One sample might have more raisins, another might have more nuts.

These three mixtures differ in the size of their particles. Which mixture has the largest particles? Which has the smallest particles?

The components of a mixture keep their own identity when they combine. Therefore, they usually can be easily separated again. Their different physical properties are used to separate them. For example, oil is less dense than water, so a mixture of oil and water can be separated by letting it stand until the oil floats to the top. Other ways of separating mixtures are shown in Figure below and in the videos below.

You hit a baseball out of the park and head for first base. You’re excited. The score is tied, and now your team has a chance of getting a winning home run. Then you hear a crash. Oh no! The baseball hit a window in a neighboring house. The glass has a big hole in it, surrounded by a web of cracks (see Figure below). The glass has changed. It’s been broken into jagged pieces. But the glass is still glass. Breaking the window is an example of a physical change in matter. 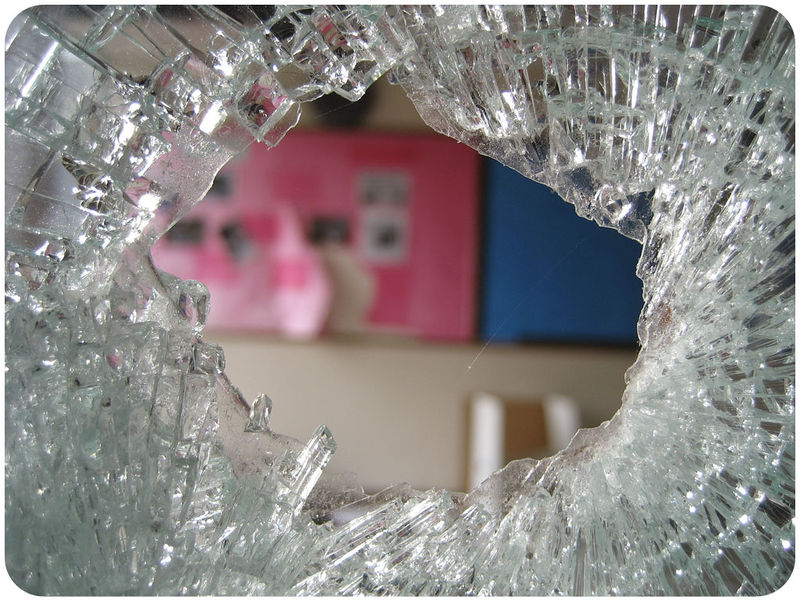 When glass breaks, its physical properties change. Instead of one solid sheet of glass, it now has holes and cracks.

A physical change in matter is a change in one or more of matter’s physical properties. Glass breaking is just one example of a physical change. Some other examples are shown in Figure below and in the video below. In each example, matter may look different after the change occurs, but it’s still the same substance with the same chemical properties. For example, smaller pieces of wood have the ability to burn just as larger logs do.

Because the type of matter remains the same with physical changes, the changes are often easy to undo. For example, braided hair can be unbraided again. Melted chocolate can be put in a fridge to re-harden. Dissolving salt in water is also a physical change. How do you think you could undo it?

Did you ever make a "volcano," like the one in Figure below, using baking soda and vinegar? What happens when the two substances combine? They produce an eruption of foamy bubbles. This happens because of a chemical change. A chemical change occurs when matter changes chemically into an entirely different substance with different chemical properties. When vinegar and baking soda combine, they form carbon dioxide, a gas that causes the bubbles. It’s the same gas that gives soft drinks their fizz. 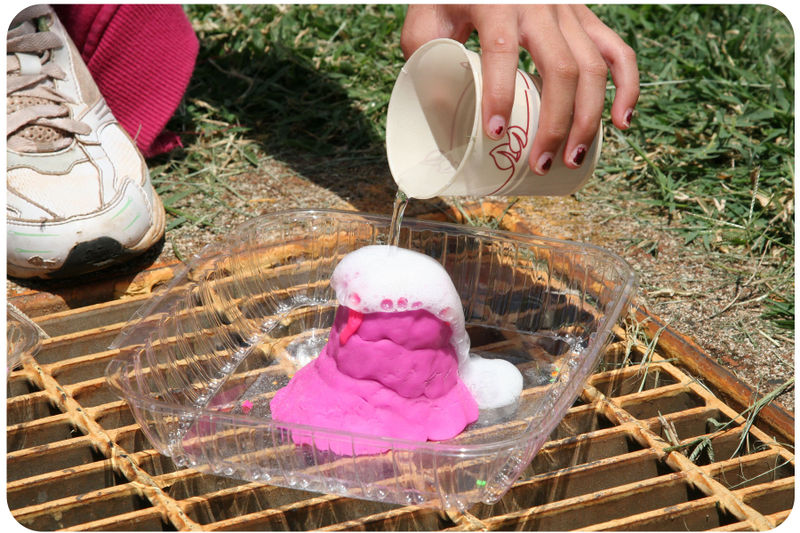 This girl is pouring vinegar on baking soda. This causes a bubbling "volcano." 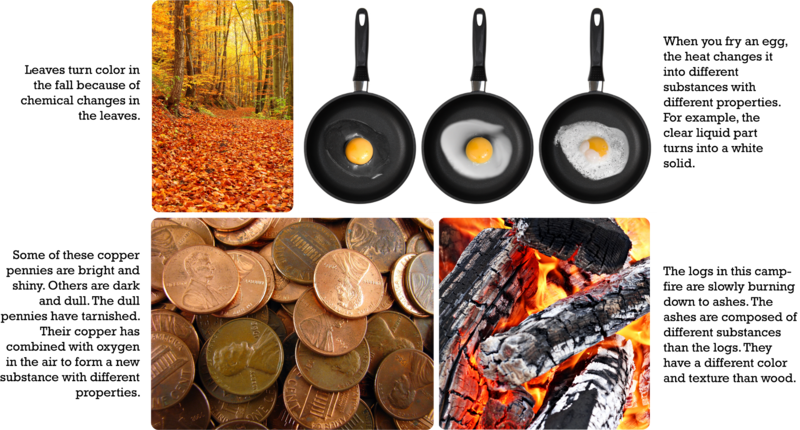 These chemical changes all result in the formation of new substances with different chemical properties. Do you think any of these changes could be undone?

How can you tell whether a chemical change has occurred? Often, there are clues. Several are demonstrated in the video below.

To decide whether a chemical change has occurred, look for these signs:

If you build a campfire, like the one in Figure below, you start with a large stack of sticks and logs. As the fire burns, the stack slowly shrinks. By the end of the evening, all that’s left is a small pile of ashes. What happened to the matter that you started with? Was it destroyed by the flames? It may seem that way, but in fact, the same amount of matter still exists. The wood changed not only to ashes but also to carbon dioxide, water vapor, and other gases. The gases floated off into the air, leaving behind just the ashes.

Burning is a chemical process. Is mass destroyed when wood burns?